Findings from Mark McNeill and Colin Fergusson from AgResearch's visit to the Chatham Islands will provide fresh insights into understanding and managing destructive pasture pests. The ASW, which feed on grass, and CRW which feed on clover plants, are significant pests which have been targeted using biological control. Sampling for weevils was done using a modified blower vac, and for porina and grass grub by digging. 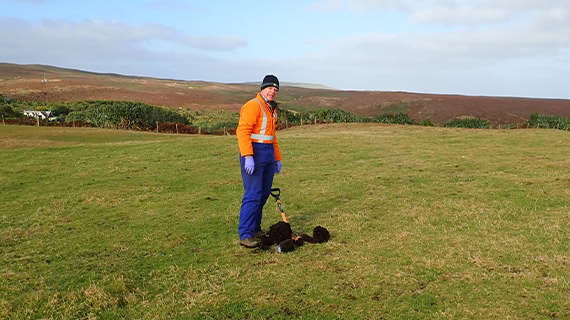 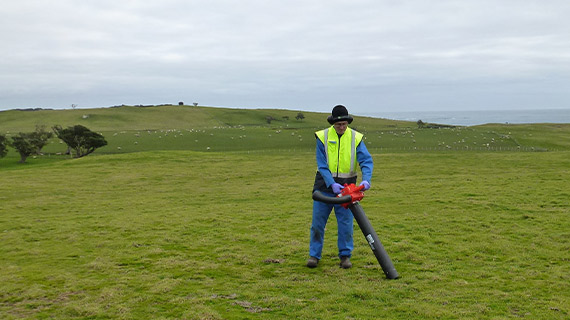 Soil samples were also taken. While wet ground conditions meant that some of the intended sites could not be sampled, the visit managed to achieve the main goals.

“The scale of damage to pasture from all these pests, particularly porina caterpillars and grass grub, is significant and very obvious,” Colin said. “Furthermore, because these caterpillars and grubs are a good protein source for wild pigs, they too are creating huge problems as they root up the pasture to eat them. While the damage from the pigs looks more visual, the damage from insects is more likely to be far greater and more widespread.”

Find out more about how we manage pests on the Chatham Islands.

Just how – and how long ago – some of these pasture pests arrived in the Chathams is unknown but most likely within the last 60–70 years. They likely hitchhiked on imports of agricultural supplies, such as hay or used farm machinery, shipped from the mainland.

In fact, based on their survey, Colin and Mark believe CRW only arrived on the Islands in the past couple of years, because it was not at every site they sampled and wasn’t found at all when Mark last sampled in 2014.

What the research showed

Rearing of CRW back at AgResearch Lincoln, found that CRW arrived from the mainland along with its wasp parasitoid (an organism that has young that develop on or within another organism): Microctonus aethiopoides. It confirms that the weevil hitched a ride on a ship heading to the Chathams, as parasitised weevils don’t fly. Interestingly, ‘Microctonus’ means ‘little murderer’ in Greek, as these tiny but human-friendly wasps attack and eventually kill the adult weevil when a new parasitoid emerges from the weevil. 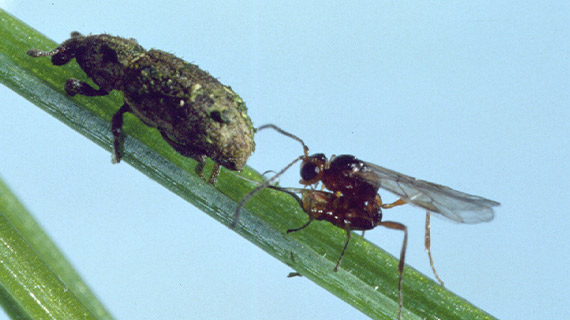 Parasitoid and its host (ASW)

Collections of ASW were to help answer a question around how genetically different ASW was to mainland populations and if this meant that it was more or less resistant to its natural enemy, another parasitoid wasp called Microctonus hyperodae. Mainland populations of ASW are showing resistance, which was not expected nor helpful for natural control of this pest.

Assessments of both grass grub larvae and soil samples also indicated that at the sites sampled, there are no effective naturally-occurring biocontrol agents for grass grub on the Chatham Islands. Work to find out what species of porina are on the island and if there is any natural disease is ongoing.

Still work to be done

Another outcome from the survey was to find that a small number of the native weevils collected alongside ASW and CRW were also being attacked by the CRW parasitoid. This non-target attack raises the question – in the long term could these native weevils be impacted by the introduced biocontrol agent? So, while we have answered some questions about pests and biocontrol on the Chathams, there’s still some work needed to complete the puzzle.

Finally, Mark and Colin would like to acknowledge the farmers on whose properties they sampled, as well as Environment Canterbury for assistance in locating sites and providing a garage as a temporary laboratory for processing the insect samples.