Last week's public meeting to discuss the airport terminal was very well supported both in physical attendance and with several people coming in on Zoom.

The meeting signalled the first stage of planning for the facility and provided an opportunity for BECA architect Campbell Craig to hear first-hand from Islanders on what they felt the important considerations were for the facility. Campbell is not new to airports, having worked on the New Plymouth terminal and currently working on the new Auckland airport development.

Chatham Islands Airport Company Limited Chair, Allan MacGibbon, presented an update on the project and the plans for the facility. This included the fact that the airport has had a 480m extension to the runway and that, at the completion of the project, the runway will be 1850 metres long, not much less than Wellington and the fifth longest in New Zealand. It will also be the only airport in the country with a full 300m runway and safety area at both ends.

The airport has also been future-proofed with the extension of the apron to cater for two code 4 jets, for example, 737 or A320 planes. Drainage has been undertaken throughout the site with water, power, and waste upgrades also completed.

The construction of the runway is now complete and the asphalt overlay is being installed. The asphalting will be completed in mid to late January, and the terminal is hoped to be completed by the end of next September.

The priority for the funding has been investing in the runway upgrade with just a small budget remaining for the terminal part of the project. The old terminal will be retained and refurbished for arrival and departures and a new FRAEMOHS design building will link to this and be entirely dedicated to security processing for outgoing passenger departures. Allan stresses this is not a completely new build but has to blend the old with the new. Retaining the link between the existing building and Hapupu was important. He also reiterated that the budget for the terminal is extremely limited.

Within the existing building, the baggage claim area will be removed and a new undercover area developed between the freight shed and terminal with interlocking gates. This follows the way most rural airports on the mainland are being developed. The operations room will remain the same. The “Koru lounge” will be retained. Some office space and storage space may be added. Remediation, carparks, and interpretation will be undertaken in the external area.

Included in his considerations for the fit-out, Allan believes acknowledgement of the people of the Island, the Tuuta family who gifted the land, and the history of aviation and its major role in the development of the Island are important. 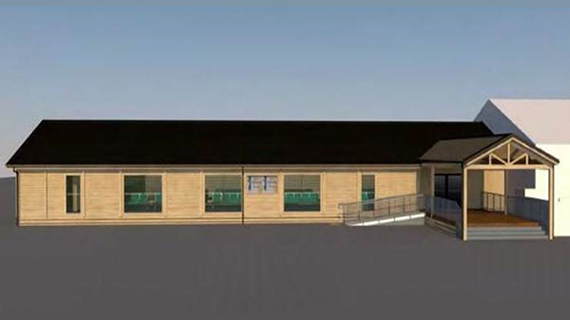 Proposed extension for departure processing prior to boarding. View from airport runway.

The feedback from those present provided an excellent foundation, highlighting many things not currently being considered. The key points raised included:

Featuring the views of the lagoon was also highlighted. Also included is the need to recognise that the airport serves as an entry point to Pitt Island.

Those attending were asked what the Chatham Islands meant to them, sparking feedback about what it feels like to arrive back home, freedom, manaakitanga, nature, culture, the resilience of islanders, fishing, sea, land, bush, eeling, weka hunting, horse riding, and the sounds of the birds.

Making features of the Inia William Tuuta Memorial, the Millennium Basalt Stone, and the albatross also needed to be incorporated into the upgrade.

The need to consider the Crown funding and look holistically at all industries including fishing, farming, and tourism along with job creation was also raised as a requirement.

The planning will continue with further specific consultation before the concept plans are developed.

The meeting was facilitated by Jackie Gurden. Further public feedback is welcomed and can be made by contacting Jackie at jgurden@xtra.co.nz or 027 420 0491. 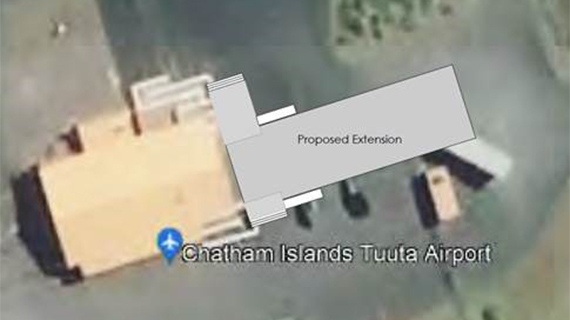 Existing terminal for arrivals and departures to be refurbished showing proposed extension.