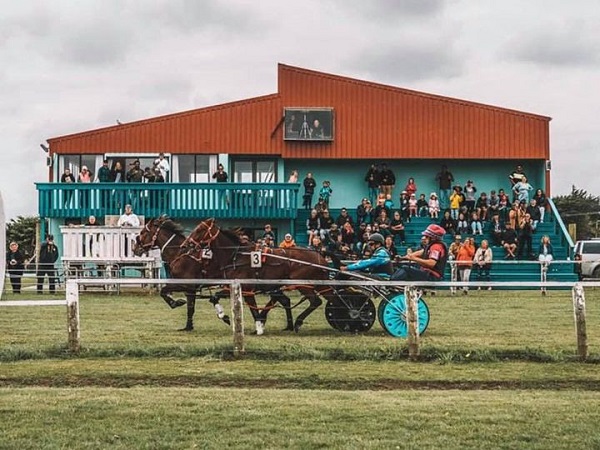 The races are held at the Norman Kirk Memorial Reserve, which has recently been upgraded thanks to funding from the Provincial Growth Fund – you can see the upgraded grandstand in this photo

The Chatham Islands Jockey Club is the oldest racing club in New Zealand, established in 1874. There is a rich history of horse racing on the Island and this story is told in the Chatham Islands Museum with photos and old trophies. The Club will be celebrating 150 years of racing in 2024 and they are going to have a special celebration, so the planning is starting now.

The Jockey Club has just completed a fantastic season of racing which is held annually on 27 and 31 December, plus a picnic day in early January. These are three days of entertainment and fun for the community, which the Club strives to continue providing. Community racing is a cornerstone of many rural regions, providing opportunities to fundraise, provide services, and get together to share stories and have a bit of fun.

The Club races both codes Gallopers and Pacers. The pacers are generally rehomed from mainland NZ. They are well bred, well-educated and they get a second chance at racing, Chathams’ style, with nine months holiday and three races per year. The ultimate Galloper is Chatham Island-born and can compete with NZ-imported thoroughbreds. The Chatham Island Cup is the prestigious race for the Island. There is also ‘Fashion in the Field’.

One of the challenges is that horse numbers have declined, so the Club would love to encourage new trainers. The Club offers syndicates for horse owners and welcomes anyone who would like to get involved in racing as an official or as a helper. The Club also plans on running some workshops and events to upskill Club members and anyone interested in being involved in racing horses.

The current committee is Denny Prendeville (President), Peter Fraser (Vice President), Alexander Hind (Secretary) and myself, Monique Croon (Treasurer), plus seven committee members. The AGM is in May which will be advertised, and new members are always welcome.

The Club wishes to thank the community members who came to the recent races. The atmosphere was so positive and encouraging. For our trainers and drivers, your attendance and support makes all the hard work worth it. Also, a huge thank you to the committee, trainers, owners, officials and sponsors for your support. We look forward to seeing you all back next season.