The Chatham Islands have joined some of the most technologically advanced places in the world thanks to the completion of a brand-new Internet of Things (IoT) network. 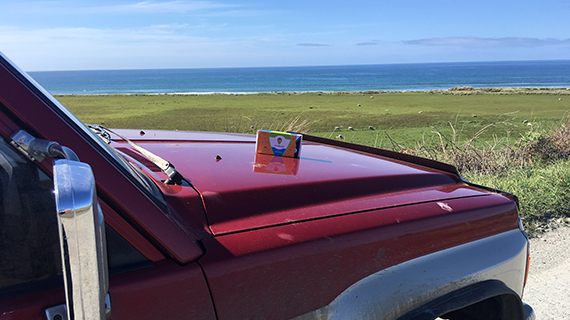 The device on the car is called a Fox Tracker. It uses the IoT network to track assets (such as boats and trucks).

Progressively, all the world’s devices — such as household appliances, smart gadgets, vehicles, and agricultural monitoring tools — are being connected to the Internet.

This is the Internet of Things and it allows devices to “talk” and “learn” from each other so they can constantly improve their performance.

An IoT network draws far less energy from devices connected to it than an Internet network, allowing devices to transmit data for years without needing new batteries.

The IoT network on the Chatham Islands has just been rolled out by Wireless Nation, alongside a big upgrade to the Islands’ satellite network which residents rely on for Internet.

Thanks to the upgrades, residents will have much faster and more reliable Internet, as well as all the benefits of a dedicated IoT network. For the people and businesses living on the Islands, the upgrades are a game changer.

“With reliable high-speed Internet recognised as a basic human right, given so much of our day-to-day lives relies on access to data, the demand for the service is growing,” Iain Torrance, Chatham Island Trust Enterprise CEO, says.

“The Internet of Things solution being trialled on the Chathams has potential to deliver considerable benefits in a wide range of environments.

“For example, we are piloting the vehicle tracking capabilities of the Wireless Nation’s GPS unit, the Fox Tracker, with a view to using it to help with safety of our lone workers.”

The device sitting on the car is called a Fox Tracker. It uses the IoT network to track assets (such as boats and trucks) on Chatham Island.

Zariff Ali, Premium Service Manager at Wireless Nation, says the network will unlock a world of economic opportunities and greater safety for Islanders.
“The IoT network deployment will change the way locals live each day by enabling them to get feedback from the natural resources they rely on as their main source of income,” Ali explains.

“Whether it’s for farming or fishing, the Chatham Islands have entered a new era of productivity with the IoT network.”

Alongside increased productivity, the IoT network comes with many benefits for the safety of people and assets.

Wireless Nation’s recently launched Fox Tracker is an inexpensive and small GPS device which can constantly transmit its location for up to seven years on a single charge.

“It will enable residents to track their assets, such as boats, for greater peace of mind — both for the owner when the boat is docked, and the owners’ loved ones when he or she is out at sea,” Ali says.

Wireless Nation Marketing Manager, Miro Sudzum, says the infrastructure upgrade on the Chatham Islands is all part of the company’s continued commitment to rural New Zealand.

“The rollout on the Chatham Islands is a great demonstration of the work we can do to bring rural New Zealand into the 21st Century,” Sudzum says.

“We’re proud of the work we’ve done here and excited to roll out more IoT networks throughout mainland New Zealand.”

For further information please contact Miro Sudzum on +64 21 1908 100 or at miro.sudzum@wnation.net.nz