150 years ago, on the Chatham Islands

On August 14, 1868 at 10.15am (Chatham Islands time), a magnitude 8.5-9.5 earthquake struck off the coast of Arica, Northern Chile, generating a large tsunami that started to move across the Pacific Ocean. Chatham Islanders noticed the tides were strange and abnormally low that evening, however they carried on as usual.

Almost 15 hours later, at 1am on August 15, an hour before high tide, a large tsunami wave arrived along the eastern and northern coasts. People awoke to a loud roar and water surging through their homes. Ten minutes later, a larger, more destructive wave hit. Then 3-5 minutes later, a third large wave followed and dragged away everything still standing.

“…the first great wave rushed in with such force and terrific noise that the very foundation of the deep seemed broken up. In ten minutes more, another wave, more terrible than the former, commenced its work of destruction and after a like interval, the third and last Island completed the catastrophe. Indeed, the full wrath of the ocean seemed to battle with the in fierce resolve to submerge it… The third wave, which came rolling in with most awful grandeur and thousand-fold power, bearing down outbuildings and stout old akeakes, which broke and cracked beneath its fury like matchwood, carrying away young cattle, and scattering the debris of the ruins far away…” — Hawke's Bay Herald, September 12 1868.

The entire Chatham Island coastline was affected by the 1868 tsunami. Te Raki, Waitangi West, Tupuangi and the eastern coast including Owenga experienced six-metre waves that flooded up to 6.4 kilometres inland. Waitangi, Te One and the South Coast experienced waves of 2.4-4.6 metres. Tupuangi, Te Raki and Waitangi West suffered the greatest impact. The entire kainga (Māori settlement) at Tupuangi, where around 70 people lived, was destroyed. Whare were smashed to pieces and vegetation was cleared leaving only sand, boulders and seaweed. Three whanau were washed away with their whare and drowned. Those who survived ran to Maunganui and gathered at the old Pā site, but were left with nothing. The once flourishing settlement was abandoned and many returned to Taranaki soon after.

At Waitangi West, a man named Makere drowned while trying to save a fishing boat between waves. At Te Raki, Mr Hay’s homestead, including a large house, woolshed, dip and farm buildings, was carried out to sea. Another house about 6.5 kilometres from Tupuangi, belonging to Captain Anderson, was also completely washed away.

The largest waves arrived in Waitangi between 1-2am. The waves wrapped around Tikitiki Hill and surged up Mangatukarewa (Nairn River), destroying a new bridge and overtopping the river banks, damaging nearby houses and the Waitangi Pā. George Selwood was woken as water rushed through his store and various objects, including the counter, barricaded the doors. The family escaped through a window and retreated to the army barracks. Mr Beamish’s accommodation house was lifted off its bearers and a large stone chimney fell. His own house did not fare much better. Waitangi Beach was a disheartening sight afterwards, covered in seaweed and the remnants of peoples’ homes and stores. The recent wreck of the Florence, previously embedded in sand, was washed high and dry up on the bank.

Owenga was said to have suffered similarly to Tupuangi. Whare 10 metres above high tide were flooded, and five whaling ships were washed away. Sand dunes along the northern and eastern sides of the Island were eroded away, and the tsunami also eroded beaches and dunes at Pitt Island.

Kaingaroa (then located on the opposite side of the harbour to where it is now) and Wangaroa/Port Hutt experienced less damage.

Abnormal waves, surges and strong currents continued for at least 24 hours, as people started to clean up the mess left behind the tsunami.

What if this happened again today?

The Chatham Islands are exposed to tsunamis from around the Pacific Ocean, particularly from South America and New Zealand. The 1868 tsunami is the largest of many recorded on the Islands over the last 200 years, but many more would have hit the Islands before this time.

The 1868 tsunami arrived with little warning, but today we have the Pacific Tsunami Warning Center in Hawaii monitoring earthquakes and sea levels around the Pacific so we know when something is on its way. Tsunami warnings are put out through radio, TV, internet and social media, telephone calls and sirens. You can do your bit by spreading the word to family and friends.

However, there may not be time to give a warning for a tsunami coming from close to the Chatham Islands. If you are near the coast and:

Then you should quickly get to higher ground or inland.

How high or far?

Check out the tsunami evacuation zones on our Emergency Management page or at our Council office. Tsunami information boards will also be put up over the next year. If you feel a long or strong earthquake, or see or hear the sea behaving strangely, you should get out of all evacuation zones. If you receive an official tsunami warning, you will be told which zones to evacuate, based on how big scientists think the tsunami is likely to be when it arrives. It’s handy to know where these evacuation zones are before you need them, rather than trying to find out when you’ve been woken by an earthquake in the middle of the night.

If you live or work in an evacuation zone, it is a good idea to have a getaway kit ready. This can include: water and non-perishable food, warm clothing/blanket, first-aid kit, radio, torch, spare batteries, sentimental items (like old photos), loo paper, baby wipes, handy towels, a tarp or camping gear, something to keep kids entertained, cash, hunting knife, and pet necessities such as food. 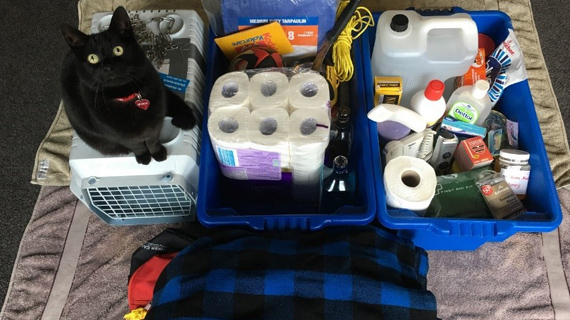 More information is available on our Emergency Management page, including tsunami evacuation zones(external link). The national Civil Defence website(external link) also has a lot of useful resources to help you prepare.

Thanks to the authors, risk specialist Kristie-Lee Thomas, and hazard scientist Helen Jack.